in Africa
Reading Time: 10 mins read
A A

Lava from Mount Nyiragongo approached Goma’s airport late on Saturday, as thousands of residents carrying mattresses and other belongings fled the border city on foot – many towards the frontier with Rwanda.

The Spirit of Nyiragongo Mount Nyiragongo is Africa’s most active volcano. Located in the war-torn country of the Democratic Republic of the Congo, it has the largest of only a small handful of permanent lava lakes in the world. Up until 2014, this region was virtually closed off due to being under control of the…

Lava from a volcanic eruption approached the airport of eastern Democratic Republic of Congo’s main city of Goma late on Saturday, and the government urged residents to evacuate.

As the red glow of Mount Nyiragongo tinged the night sky above the lakeside city of about 2 million, thousands of Goma residents carrying mattresses and other belongings fled the city on foot – many toward the frontier with Rwanda.

Nyiragongo’s last eruption in 2002 killed 250 people and left 120,000 homeless. It is one of the world’s most active volcanoes and is considered among the most dangerous.

Rwanda’s Ministry in Charge of Emergency Management said more than 3,500 Congolese have crossed the border. Rwandan state media said they would be lodged in schools and places of worship.

New fractures were opening in the volcano, letting lava flow south toward the city after initially flowing east toward Rwanda, said Dario Tedesco, a volcanologist based in Goma.

“Now Goma is the target,” Tedesco told Reuters. “It’s similar to 2002. I think that the lava is going towards the city centre.” 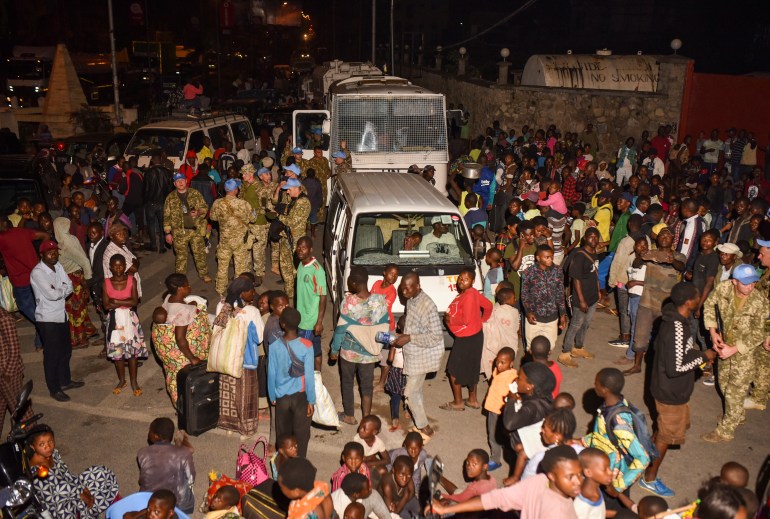 “It might stop before or go on. It’s difficult to forecast,” he said.

Emmanuel De Merode, head of Virunga National Park, asked park employees in parts of Goma to evacuate, according a note seen by Reuters. He said lava had reached the international airport on the eastern edge of the city but that it was not likely to reach other parts of Goma.

Celestin Kasereka, head of scientific research at the Goma Volcano Observatory (OVG), told reporters he did not think the lava was flowing fast enough to reach Goma.

A United Nations source said all U.N. aircraft had been evacuated to the city of Bukavu to the south and Entebbe in neighbouring Uganda. The power was also out across much of Goma.

Prime Minister Jean-Michel Sama Lukonde convened an emergency meeting in the capital, Kinshasa, where the government activated an evacuation plan for Goma.

“We hope that the measures that have been taken this evening will allow the population to reach the points that were indicated to them in this plan,” government spokesman Patrick Muyaya said in comments broadcast on national television.

President Felix Tshisekedi will cut short a trip to Europe to return to Congo on Sunday, the presidency said on Twitter.

On the streets of Goma, panic spread quickly.

“We are panicked because we have just seen the entire city covered by a light that is not electricity or lamps,” said John Kilosho. “We don’t know what to do. We don’t even know how to behave. There is no information.”

Others fled to the city centre from villages and neighbourhoods threatened by lava on the northern outskirts.

“We looked at the sky and saw the red colour of the volcano,” said Richard Hazika Diouf from the Majengo neighbourhood. “We have fled to seek shelter in town.”

Volcano watchers have been worried that the volcanic activity observed in the last five years at Nyiragongo mirrors that in the years preceding eruptions in 1977 and 2002.

The Spirit of Nyiragongo

Mount Nyiragongo is Africa’s most active volcano. Located in the war-torn country of the Democratic Republic of the Congo, it has the largest of only a small handful of permanent lava lakes in the world. Up until 2014, this region was virtually closed off due to being under control of the rebel group M23.

Local legend claims the volcano is inhabited by the spirit of Nyiragongo. That spirit is thought to be a fierce enemy of the spirit of an adjacent mountain, Ryang’ombe. They occasionally go to war with one another, resulting in destructive and powerful volcanic eruptions.

In 2002, Nyiragongo erupted, leveling over 30 percent of the city of Goma. A majority of the city now is being rebuilt on the hardened lava flow, several meters higher than where the city previously stood. While lava often runs slowly due to high silica content, Nyiragongo’s lava reached speeds up to 65 kilometers per hour due to its low viscosity. Within hours of the eruption, the lava reached Goma, a city of over one million people. Due to the porous bedrock under Goma, fissures opened underneath the city, spewing lava, and causing petrol stations to explode.

Mount Nyiragongo is an active stratovolcano with an elevation of 3,470 m (11,385 ft) in the Virunga Mountains associated with the Albertine Rift. It is located inside Virunga National Park, in the Democratic Republic of the Congo, about 20 km (12 mi) north of the town of Goma and Lake Kivu and just west of the border with Rwanda. The main crater is about two kilometres (1 mi) wide and usually contains a lava lake. The crater presently has two distinct cooled lava benches within the crater walls – one at about 3,175 m (10,417 ft) and a lower one at about 2,975 m (9,760 ft). Nyiragongo’s lava lake has at times been the most voluminous known lava lake in recent history. The depth of the lava lake varies considerably. A maximum elevation of the lava lake was recorded at about 3,250 m (10,660 ft) prior to the January 1977 eruption – a lake depth of about 600 m (2,000 ft). Following the January 2002 eruption, the lava lake was recorded at a low of about 2,600 m (8,500 ft), or 900 m (3,000 ft) below the rim. The level has gradually risen since then. Nyiragongo and nearby Nyamuragira are together responsible for 40 per cent of Africa’s historical volcanic eruptions

Not much is known about how long the volcano has been erupting, but since 1882, it has erupted at least 34 times, including many periods where activity was continuous for years at a time, often in the form of a churning lava lake in the crater. The existence of the lava lake had been suspected for some time but was not scientifically confirmed until 1948. At that time, it was measured at nearly 120,000 square metres (1.3×106 sq ft). Subsequent expeditions showed that the lake fluctuated in size, depth, and temperature over time.

Between 1894 and 1977 the crater contained an active lava lake. On 10 January 1977, the crater walls fractured, and the lava lake drained in less than an hour.[1] The lava flowed down the flanks of the volcano at speeds of up to 60 kilometres per hour (37 mph) on the upper slopes, the fastest lava flow recorded to date,[13] overwhelming villages and killing at least 70 people. Within 30 minutes, the lava lake had emptied, flowing north, south, and west of the volcano. Nowhere else in the world does such a steep-sided stratovolcano contain a lake of such fluid lava. Nyiragongo’s proximity to heavily populated areas increases its potential for causing a natural disaster. The 1977 eruption raised awareness of the unique dangers posed by Nyiragongo, and because of this, in 1991 it was designated a Decade Volcano, worthy of particular study.

The 1977 eruption was preceded by the creation of a new small volcanic vent, Murara, a short distance away on the slopes of Nyamuragira.

Lava lakes reformed in the crater in eruptions in 1982–1983 and 1994. Another major eruption of the volcano began on 17 January 2002, after several months of increased seismic and fumarolic activity. A 13 kilometres (8.1 mi) fissure opened in the south flank of the volcano, spreading in a few hours from 2,800 to 1,550 metres (9,190 to 5,090 ft) elevation and reaching the outskirts of the city of Goma, the provincial capital on the northern shore of Lake Kivu. Lava streamed from three spatter cones at the end of the fissure and flowed in a stream 200 to 1,000 metres (660 to 3,280 ft) wide and up to 2 metres (6 ft 7 in) deep through Goma. Warnings had been given and 400,000 people were evacuated from the city across the Rwandan border into neighbouring Gisenyi during the eruption. Lava covered the northern end of the runway at Goma International Airport, leaving the southern two-thirds usable, and reached Lake Kivu. This raised fears that the lava might cause gas-saturated waters deep in the lake to suddenly rise to the surface, releasing lethally large amounts of carbon dioxide and methane – similar to the disaster at Lake Nyos in Cameroon in 1986. This did not happen, but volcanologists continue to monitor the area closely.

About 245 people died in the eruption from asphyxiation by carbon dioxide and buildings collapsing due to the lava and earthquakes. Lava covered 13 per cent of Goma, about 1.8 square miles (4.7 km2), and nearly 120,000 people were left homeless.

Immediately after the eruption stopped, a large number of earthquakes were felt around Goma and Gisenyi. This swarm activity continued for about three months and caused the collapse of more buildings.

Six months after the start of the 2002 eruption, Nyiragongo volcano erupted again. Activity at Nyiragongo is ongoing but currently confined to the crater, where another lava lake has formed about 250 metres (820 ft) below the level of the 1994 lava lake.

Localized carbon dioxide toxicity, known locally as ‘mazuku’, has killed children even more recently. In locations where the gas seeps from the ground at relatively high levels, without the dispersing effects of wind, its effects can be deadly. On 8 March 2016, Goma Volcano Observatory discovered a new vent that opened in the northeast edge of the crater, following local reports of rumblings coming from the volcano. Some fear that this could lead to a flank eruption. Activity in 2020, including a rise in the lava lake, has led observers to suggest that an eruption is likely by 2024.

On 22 May 2021, it was reported that the volcano was erupting again. Lava approached the Goma airport and moved towards the city centre of eastern Goma. A highway to Beni was cut off by lava, and authorities urged residents from the city of Goma to evacuate.

The volcano is monitored by a team of scientists at the Goma Volcanic Observatory (GVO). It is continuously monitored, with seismic data produced every four minutes and temperature data produced every ten minutes. Continued funding for the GVO is in doubt, as the World Bank decided in 2020 to terminate its contributions

The Types of County Plans in Kenya

The Types of County Plans in Kenya