The Man Who Invented the Refrigerated Truck (ThermoKing)

It was Minnesota-based engineer African American Frederick McKinley Jones who finally “broke the ice” with his invention and 1940 patent of the first practical transport refrigeration unit for trucks. His portable air-cooling device featured a gasoline motor built to handle the jolts of over-the-road travel. Refrigerated Trucks were Invented by An African Inventor Frederick McKinley Jones in 1940

Although Frederick McKinley Jones changed everything from race cars to the movie industry and from boats to medical treatment, he is best known for his role in founding Thermo King. Refrigerated Trucks

Jones was born in Cincinnati, Ohio in 1893—almost two decades before mechanical refrigerators were even available in the United States.  Orphaned at age eight, he was raised by a priest in Kentucky and left school after 8th grade.   He had a natural aptitude and understanding of machines and mechanical devices—something he continued to develop through reading and self-education.

When he was sixteen, Jones took a position as an apprentice auto mechanic, eventually moving to Minnesota to work on a 50,000-acre farm.   He put his natural mechanical abilities and inventiveness to work for the U.S. Army in World War I, teaching himself electronics along the way.   He returned to Minnesota in 1930 and, after attracting attention by building a transmitter for his town’s new radio station, he was hired to improve sound equipment made by Joseph Numero, owner of Cinema Supplies, Inc. Refrigerated Trucks

In July of 1940, Jones patented a refrigeration system for trucks that would allow them to transport perishable foods for longer distances.  Cinema Supplies, made successful in large part due to Jones’ designs and improvements, was sold to RCA and Numero and Jones started a refrigeration company called Thermo King.

The concept of refrigerating transported goods was novel at the time.  When Thermo King’s “Model A” refrigeration units were applied beyond trucks to things like boats, planes, and boxcars, it had an immediate and dramatic effect on the availability of food world-wide.  Suddenly millions around the world could enjoy fresh foods any time of the year.

Fruits and vegetables were able to be shipped to troops stationed overseas in World War II.  Crops that were seasonal in the South could make it to the North without spoiling.  It also meant that army hospitals and battlefields could receive shipments of transfusion blood and medicines that wouldn’t have been possible years before. Refrigerated Trucks

Beyond the immediate benefits, Jones’ refrigeration unit had a long-lasting, global impact on agricultural.  It opened the doors for international trading, creating a world-wide market for all food crops and forever changing our definition of “seasonal” foods.  It also eventually led to frozen foods, supermarkets and container shipping—staples in our modern life and in our food supply chains.

Before he passed away in 1961, Jones had over 60 patents in various fields—including one for a portable x-ray machine.  Forty of his patents were related to refrigeration.  He was also the first African American elected to the American Society of Refrigeration Engineers and the first to receive the National Medal of Technology posthumously in 1991. Refrigerated Trucks

At USDA’s Agricultural Marketing Service (AMS), we celebrate the contributions made by African American innovators, like Fred Jones. His contributions directly impacted what we do—especially in our Agricultural Transportation division, where we see the results of his work every day.   He used his passion for refrigeration and his inventiveness to increase food safety during shipment and made food more accessible world-wide.

If your refrigerator has any produce from your local grocery store, then you can credit African in America inventor Frederick McKinley Jones. Jones took out more than 60 patents throughout his life, including a patent for the roof-mounted cooling system that’s used to refrigerate goods on trucks during extended transportation in the mid-1930s. He received a patent for his invention in 1940, and co-founded the U.S. Thermo Control Company, later known as Thermo King. The company was critical during World War II, helping to preserve blood, food and supplies during the war.

Frederick McKinley Jones (May 17, 1893 – February 21, 1961) was an American inventor, entrepreneur, winner of the National Medal of Technology, and an inductee of the National Inventors Hall of Fame. His innovations in refrigeration brought great improvement to the long-haul transportation of perishable goods. He co-founded Thermo King.

Jones was born in Cincinnati, Ohio on May 17, 1893 to an Irish father and African-American mother. His mother deserted him when he was a child. His father struggled to raise him on his own. After he was virtually orphaned at the age of seven, he was raised by a priest at a Catholic rectory in Cincinnati. Jones left school after 6th grade and left the rectory to return to Cincinnati at age 11, where he got a job first as a cleaning boy and by age 14 he was working as an automobile mechanic. Jones was largely self taught. He boosted his natural mechanical ability and inventive mind with independent reading and study and the willingness to seek new pastures in his search for advancement, against the odds.

In 1912, Jones moved to Hallock, Minnesota, where he worked as a mechanic on a 50,000-acre (200 km2) farm.[4] He lived there for over 20 years which he would later say in a newspaper article that Hallock was a place “where a man … [was] judged more on his character and ability than on the color of his skin.”

Jones took part in World War 1 in an all-black unit until his mechanical skills were spotted and he was promoted to sergeant working as an electrician and even teaching other soldiers his knowledge.

After service with the U.S. Army in World War I, Jones returned to Hallock; while employed as a mechanic, Jones taught himself electronics and built a transmitter for the town’s new radio station. He also invented a device to combine sound with motion pictures. This attracted the attention of Joseph A. Numero of Minneapolis, Minnesota, who hired Jones in 1930 to improve the sound equipment made by his firm, Cinema Supplies Inc.

Jones was a keen racing driver and got fired from a job because he was driving on company time.

Around 1938, Jones designed a portable air-cooling unit for trucks carrying perishable food, and received a patent for it on July 12, 1949. Numero sold his movie sound equipment business to RCA and formed a new company in partnership with Jones, the U.S. Thermo Control Company (later the Thermo King Corporation) which became a $3 million business by 1949. Portable cooling units designed by Jones were especially important during World War II, preserving blood, medicine, and food for use at army hospitals and on open battlefields. 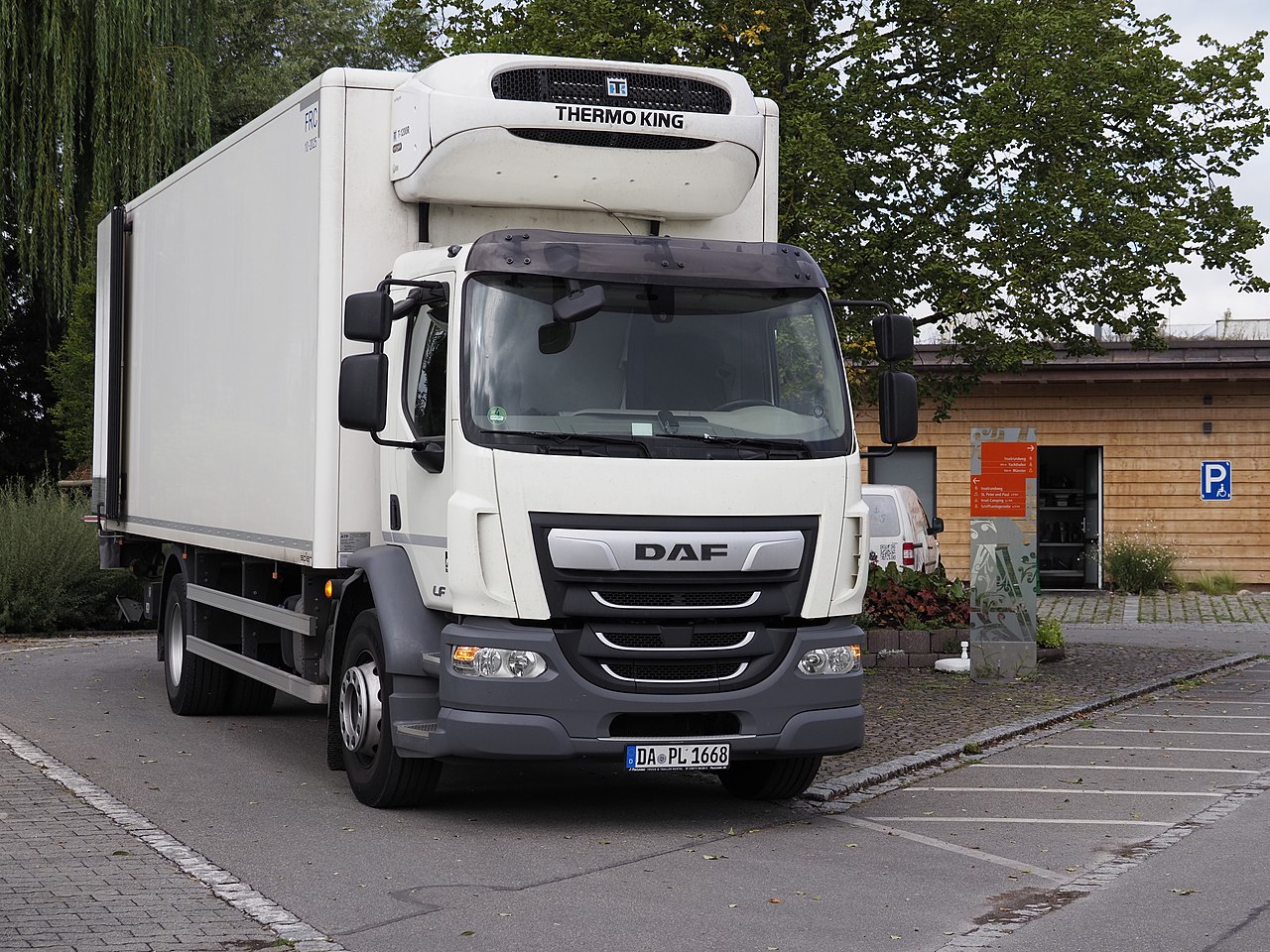 He also developed a portable x-ray machine, a movie-ticket dispenser, an early radio service for local doctors, a “snow machine” that attached skis to a propeller powered snowmobile and sound track synchroniser (later selling the patent to RCA).

During his life, Jones was awarded 61 patents. Forty were for refrigeration equipment, while others went for portable X-ray machines, sound equipment, and gasoline engines.

He died of lung cancer in Minneapolis in 1961, predeceasing his wife Lucille. In an obituary in the Saturday Evening Post it was said “Most engineers start at the bottom of a project and work up, but Fred takes a flying leap to the top of the mountain and then backs down, cutting steps for himself and the rest of us as he goes.”

Entrepreneur Joseph A. “Joe” Numero sold his Cinema Supplies Inc. movie sound equipment business to RCA in 1938 and formed a new entity, the U.S. Thermo Control Company (later the Thermo King Corporation), in partnership with his engineer, inventor Frederick McKinley Jones. Jones designed a portable air-cooling unit for trucks carrying perishable food, for which they had obtained a patent on July 12, 1940, subsequent to a challenge to invent a refrigerated truck over a golf game by associates of Numero’s, Werner Transportation Co. president Harry Werner, and United States Air Conditioning Co. president Al Fineberg, resulting in the “Model A” and the founding of Thermo King.

The landmark invention ushered in the era of frozen foods, large supermarkets, and the modern restaurant industry. Refrigerated transport made the delivery of fresh produce anywhere in the country a possibility, regardless of the season. The concept of continuous cooling of perishables is often referred to as the “Farm to Fork” cold chain. With mobile refrigeration compressors driven by fuel-powered engines and stationary refrigeration compressors driven by grid-sourced electricity, the food is kept cold from the point of production through to the point of distribution to consumers.

The introduction of diesel engines in refrigerated units, in 1958, by Thermo King was a big step for many reasons, with the main benefit being extended engine life as compared to gasoline-powered units. Thermo King was not limited to transport refrigeration products, however. Some of the additional products the company built and sold included milk coolers, golf carts, school desks and shopping carts.

On March 5, 1966, a group of 75 people associated with the company were among the 113 passengers and 11 crew members who died when BOAC Flight 911 crashed near Mount Fuji, Japan. Company executives and their top dealers were on a 14-day company sponsored tour of Japan and Southeast Asia, organized as a reward for sales performance. A company spokesman, quoted in the press in reaction to the tragedy, said that “this has got to be one of the worst things that a company can experience.”

During the 1970s, Thermo King continued to manufacture equipment for the transportation industry. Thermo King’s early efforts have evolved into a widely recognized line of products. At the same time, Thermo King was becoming a worldwide business. Thermo King Europe opened in Galway, Ireland, and began producing refrigeration units sold throughout Europe, Africa, Middle East, Australia and Asia. The global expansion continues to this day.

In 1991, the National Medal of Technology was awarded to Joseph A. Numero and Frederick M. Jones. President George Bush presented the awards posthumously to their widows at a ceremony in the White House Rose Garden. Jones was the first African American to receive the award (see Frederick McKinley Jones).

In 1997, Ingersoll Rand acquired Thermo King from Westinghouse for $2.56 billion in cash, 13 times earnings and added it to its Climate Control Technologies (later Climate Solutions) businesses, alongside Trane and Hussmann. At the time Thermo King controlled close to half the global market for refrigeration equipment.

Most recently, in addition to continued technology improvements in transport temperature control, Thermo King has launched the TriPac hybrid auxiliary idle reduction and temperature management system, which eliminates the need for a truck engine to idle to provide heating and air conditioning to the truck cab.

https://www.facebook.com/nyongesande, “Black African Inventions That Changed the World yet No One Talks about Them – Nyongesa Sande” (Nyongesa SandeSeptember 21, 2020) <https://www.nyongesasande.com/black-african-inventions-that-changed-the-world-yet-no-one-talks-about-them/> accessed October 17, 2021.

Automatic Elevator Doors were Invented by Alexander Miles in 1887

Safaricom’s Simu ya Jamii was launched 2003

Automatic Elevator Doors were Invented by Alexander Miles in 1887

Electret Microphone was Co-Invented by James E. West in 1964