in Qatar
Reading Time: 5 mins read
A A

Qatar Fuel Company Q.P.S.C., d/b/a WOQOD, is a Qatari oil and gas company focused on the distribution and sale of refined petroleum products supplied by Qatar Petroleum. It is the only fuel retailer in Qatar and is publicly listed on the Qatar Stock Exchange. As of Jan 2020, the company maintained 100 filling stations throughout the country. Aside from filling stations, the company operates vehicle workshops, tire stations and convenience stores. The company also has numerous subsidiaries

During an Extraordinary General Assembly held in June 2018, the company made the decision to increase non-Qatari ownership to 49% in order to attract investments. A budget of QR 634 million was allocated for 2018 to be earmarked for the construction of new filling stations and the development of currently existing ones. According to company officials, plans are in place to install 88 filling stations by the end of 2018 with a total of 100 by 2020

The company is involved in shipping bitumen. In 2014, the company reached an agreement with Ashghal (The Public Works Authority) to import 130,000 tonnes to be used in construction works. At the time the agreement was reached, Qatar Fuel had two bitumen tankers, with an additional $6 million ship being purchased in November 2014.

Beginning in 2006, Qatar Fuel has opened several convenience stores under the name Sidra. The company maintains upwards of 30 Sidra convenience stores, the majority of which are associated with filling stations. In 2014, following a general assembly meeting, it was announced that Qatar Fuel had begun the process of upgrading all of its Sidra stores into supermarkets.

WOQOD develops and implements governance framework and standards to manage risks in line with industry best practices and international standards to accomplish our policies and achieves strategic business objectives. 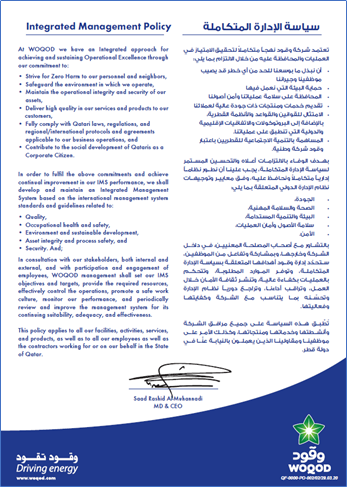 How to Detect Encrypted Files

How to check my Account Balance on Vodafone Qatar

How to get your COVID-19 vaccination appointment in Qatar

How to Detect Encrypted Files

How to Add an Airprint Printer