Namibia’s Neckartal: the N$2.95 billion newly completed dam that irrigates a desert - what you should know

in Africa
Reading Time: 6 mins read
A A

The Neckartal Dam, nicknamed the Desert Dragon, is a dam located in the ǁKaras Region of southern Namibia. It is a curved gravity dam on the Fish River near Berseba, c. 40 kilometres (25 mi) northwest of the regional capital Keetmanshoop. Construction started in 2013 and was initially expected to finish in 2017. Since its completion in 2018, it is the largest dam in Namibia, more than three times the capacity of the Hardap Dam upstream. The dam’s purpose is to support a 5,000 hectares (12,000 acres) irrigation scheme nearby.

Deep in the driest desert in the world in southern Namibia, the life and well-being of people who live in its sand dunes and deep canyons depends entirely on the waters of the Fish River. At certain times of the year the humidity does not exceed 1%. And at other times, colossal floods are caused by torrential rains capable of pouring as much as 15 meters of water from the sky in just two days. These exceptional events happen a few times a year, usually in January and February, and have now been transformed into a livelihood thanks to the construction of a dam.

The Neckartal Dam, an hour’s drive from the city of Keetmanshoop, has put nature at the service of the population, making the most of this incredible wealth of water that would otherwise be lost, and is a strategic resource to nourish crops and guarantee the survival of thousands of people.

Inaugurated in March 2020 and built by Salini Impregilo, the dam is the last of the country’s large infrastructure projects to promote agriculture, one of Namibia’s most important economic activities.

Neckartal Dam: our commitment to Namibia

Guido Scalzi is a 37-year-old engineer. He arrived in the Namibian desert at the beginning of 2014 when he was 30 years old, starting as an electromechanical technician.

“When I arrived, there was nothing here,” he recalls. “Work had officially started on September 11, 2013 and we were still setting up the site. We were all catapulted into a magical place, where human presence is practically non-existent. An arid, dry place, full of animals, with an indescribable blue sky.”

In this other-worldly setting, as many as 2,500 people were directly employed on the worksite during peak times, for a total of 5,000 people overall — including indirect workers — who contributed to the construction of the dam.

“Almost the entire workforce comes from the villages and towns nearby,” explains Scalzi, who was appointed first technical manager and then project manager. “Many young people who did not have enough to live on were trained and integrated into the construction site. Our safety manager, for example, is a local Namibian, while another young man who was trained on the construction site, from Zimbabwe, is now an employee of Salini Impregilo and is working as chief accountant in the construction of the highest dam in the world in Tajikistan.”

The story of the Neckartal Dam is also a story of local community development. Namibia has just over two million inhabitants, a poor country that is mainly supported by raw materials (uranium, zinc and diamonds), niche tourism, and agriculture.

The Neckartal worksite, besides having called thousands of people to work, has reactivated the economy of the city of Keetmanshoop.

“When the worksite opened there was not even a mechanic in the entire city,” Scanzi recalls. “Little by little, the supply chain created by the worksite pushed the inhabitants to set up new businesses, restaurants, shops, and offered various services. A process was set in motion that involved thousands of people.”

The Karas region, where the dam was built, is one of the poorest and least densely populated in Namibia. It is located in the far south of the country and touches the Atlantic Ocean to the west. Its main characteristic is the aridity of its land, barren and without water for most of the year. Now scarcity has been significantly reduced thanks to the Neckartal Dam.

Rising as high as 78.5 metres (255 feet) and 518 metres (1700 feet) long at the crest, the dam stops the course of the Fish River at times of flood, creating the largest reservoir in Namibia, about 40 square kilometres (15 square miles) wide and with a capacity of 857 million cubic meters, the equivalent of 300,000 Olympic swimming pools. The water collected in the reservoir is used first of all to produce energy through two Francis turbines, and then runs into the river until it meets a smaller tributary 13 kilometers (8.0 miles) downstream to reach another dam, much smaller than the previous one, equipped with another pumping station from which the water is pushed into a11 kilometer (6.8 miles) long pipeline leading to a new reservoir.

This is where phase two of the Neckartal project starts: an irrigation network covering 5,000 hectares (12,300 acres) of crops in a great opportunity for the local economy.

The same system has been adopted by other dams. Naute Dam, built on one of the tributaries of the Fish River, has also created a series of table grape and date crops, which are exported to the Middle East during off-season periods. The same goes for the Hardap dam, built in the 1960s in order to use the water collected within the

basin for agricultural purposes. Even today, that dam still nourishes a green and luxuriant area, which grows on the edge of the desert, an incredible sight that confirms the importance of efficient water management for the development and well-being of these populations.

The importance of Neckartal dam to Namibia

The desert dam is not only a great piece of engineering that will make efficient use such a precious resource as water, but an opportunity for economic revival for the whole region, starting from the town of Keetmanshoop, located 40 kilometers (25 miles) from the dam.

Once the water begins to flow into the plantations, everyone’s expectation is that this region of Namibia will become an agricultural hub, capable of selling its products abroad and creating jobs for thousands of people.

In the Karas region, agriculture is the primary economic sector and, together with forestry and fishing, employs over 30% of the population. Thousands of people are therefore waiting to benefit from the effects of the great dam, the work capable of transforming the rebellious floods of the Fish River into an opportunity for redemption and growth. 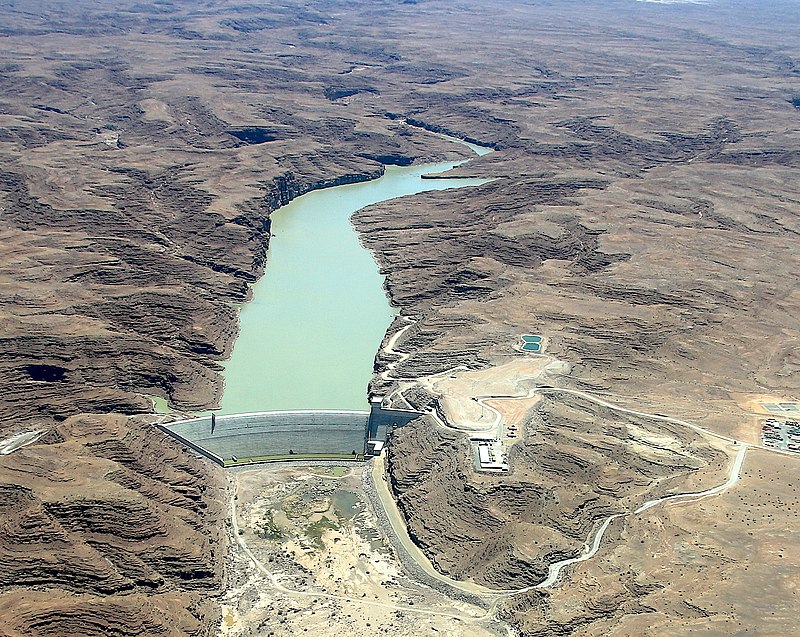 The idea to construct a dam near Keetmanshoop already came up during the German colonialisation. Upon Namibian independence in 1990, the planning slowly started. Although hailed as a promising job creation project, particularly after commission due to the purpose as an irrigation dam, there were doubts over the necessity to build it. Naute Dam in the same area, likewise an irrigation dam, is under-utilised. However, for an irrigation scheme of 5,000 hectares (12,000 acres) as envisaged for the Neckartal Dam, Naute Dam was deemed too small.[2]

Italian company Salini Impregilo was awarded the 2.8 billion N$ tender to build the dam in March 2012. After a legal challenge by one competitor, the tender was withdrawn but reawarded to the same company in August 2013. Construction started it within a month. Originally planned to take 3 years, the project has been delayed by a court case and labour unrest. Its completion occurred in October 2018, after which the filling-up phase is expected to last another two years. The dam overflowed for the first time on January 19, 2021.

This is Why You Should Consider Buying MADE IN AFRICA Chocolates