by Nyongesa Sande
in Africa, African History
Reading Time: 6 mins read
A A
0

Apollo Milton Obote (28 December 1925 – 10 October 2005) was a Ugandan political leader who led Uganda to independence in 1962 from British colonial administration. Following the nation’s independence, he served as Prime Minister of Uganda from 1962 to 1966 and President of Uganda from 1966 to 1971, then again from 1980 to 1985. He was overthrown by Idi Amin in 1971, but was re-elected in 1980 a year after Amin’s 1979 overthrow. His second period of rule ended after a long and bloody conflict known as the Ugandan Bush War.

Milton Obote was born at Akokoro village in Apac district in northern Uganda. He was the third born of nine children[4] of a tribal chief of the Oyima clan Lango ethnic group. He began his education in 1940 at the Protestant Missionary School in Lira, and later attended Gulu Junior Secondary School, Busoga College and eventually university at Makerere University. Having intended to study law, a subject not taught at the university, Obote took a general arts course, including English and geography. At Makerere, Obote honed his natural oratorical skills; he may have been expelled for participating in a student strike, or alternatively left after a place to study law abroad was not funded by the protectorate government. He worked in Buganda in southern Uganda before moving to Kenya, where he worked as a construction worker at an engineering firm.

While in Kenya, Obote became involved in the national independence movement. Upon returning to Uganda in 1956, he joined the political party Uganda National Congress (UNC), and was elected to the colonial Legislative Council in 1957. In 1959, the UNC split into two factions, with one faction under the leadership of Obote merging with Uganda People’s Union to form the Uganda People’s Congress (UPC).

In the runup to independence elections, Obote formed a coalition with the Buganda royalist party, Kabaka Yekka. The two parties controlled a Parliamentary majority and Obote became Prime Minister in 1962. He assumed the post on 25 April 1962, appointed by Sir Walter Coutts, then Governor-General of Uganda. The following year the position of Governor-General was replaced by a ceremonial presidency to be elected by the parliament. Mutesa, the Kabaka (King) of Buganda, became the ceremonial President, with Obote as executive prime minister.

In January 1964, a mutiny occurred at the military barracks at Jinja, Uganda’s second city and home to the 1st Battalion of the Uganda Army. There were similar mutinies in two other eastern African states; all three countries requested the support of troops from the British military. Before they arrived, however, Obote sent his defence minister Felix Onama to negotiate with the mutineers. Onama was held hostage, and agreed to many demands, including significant pay increases for the army, and the rapid promotion of many officers, including the future president Idi Amin. In 1965, Kenyans had been barred from leadership positions within the government, and this was followed by the removal of Kenyans en masse from Uganda in 1969, under Obote’s guidance.

As prime minister, Obote was implicated in a gold smuggling plot, together with Idi Amin, then deputy commander of the Ugandan armed forces. When the Parliament demanded an investigation of Obote and the ousting of Amin, he suspended the constitution and declared himself President in March 1966, allocating to himself almost unlimited power under state of emergency rulings. Several members of his cabinet, who were leaders of rival factions in the party, were arrested and detained without charge. Obote responded with an armed attack upon Mutesa’s palace, which ended with Mutesa fleeing to exile. In 1967, Obote’s power was cemented when the parliament passed a new constitution that abolished the federal structure of the independence constitution and created an executive presidency.

In 1969, there was an attempt on Obote’s life. In the aftermath of the attempt, all opposition political parties were banned, leaving Obote as an effectively absolute ruler. A state of emergency was in force for much of the time and many political opponents were jailed without trial for life. Obote’s regime terrorised, harassed, and tortured people. His secret police, the General Service Unit, led by Obote’s cousin, was responsible for many cruelties.

In 1969–70, Obote published a series of pamphlets that were supposed to outline his political and economic policy. The Common Man’s Charter was a summary of his approach to socialism, which became known as the Move to the Left. The government took over a 60% share in major private corporations and banks in the country in 1970. During Obote’s regime, flagrant and widespread corruption emerged in the name of his version of “socialism”. Food shortages sent prices through the ceiling. Obote’s persecution of Indian traders contributed to this rise in prices.

In January 1971, Obote was overthrown by the army while on a visit to Singapore to attend a Commonwealth conference, and Amin became President. In the two years before the coup Obote’s relations with the West had become strained. Some have suggested that Western Governments were at least aware of, and may have aided, the coup.[13][14] The Israeli government certainly played an active role in planning and implementing the coup. They operated mechanized equipment and maintained a high profile in and around the capital including manning roadblocks. According to one source, “They were to be seen everywhere.” Obote fled to Tanzania. The fall of Obote’s regime was welcomed and celebrated by many Ugandans

In 1979, Idi Amin was ousted by Tanzanian forces aided by Ugandan exiles. By 1980, Uganda was governed by an interim Presidential Commission. At the time of the 1980 elections, the chairman of the commission was a close associate of Obote, Paulo Muwanga. Muwanga had briefly been the de facto President of Uganda from 12–20 May 1980, as one of three presidents who served for short periods of time between Amin’s ousting and the setting up of the Presidential Commission. The other two presidents were Yusuf Lule and Godfrey Binaisa.

The elections in 1980 were won by Obote’s Uganda People’s Congress (UPC) party. However, the UPC’s opposition believed that the elections were rigged, which led to a guerrilla war by Yoweri Museveni’s National Resistance Army (NRA) and several other military groups. Obote held the additional title of Minister of Finance.

In 1983, the Obote government launched Operation Bonanza, a military expedition that claimed tens of thousands of lives and displaced a significant portion of the population. The brunt of the blame for this massacre was placed on the people of northern Uganda for supporting the action of the Prime Minister which increased the existing regional tensions in the country. It has been estimated that approximately 100,000 to 500,000 people died as a result of fighting between Obote’s Uganda National Liberation Army (UNLA) and the guerrillas.

On 27 July 1985, Obote was deposed again. As in 1971, he was overthrown by his own army commanders in a military coup d’état; this time the commanders were Brigadier Bazilio Olara-Okello and General Tito Okello. The two men briefly ruled the country through a Military Council, but after a few months of near chaos, Museveni’s NRA seized control of the country. By July 1985, Amnesty International estimated that the Obote regime had been responsible for more than 300,000 civilian deaths across Uganda. Abuses were particularly conspicuous in an area of central Uganda known as the Luweero Triangle 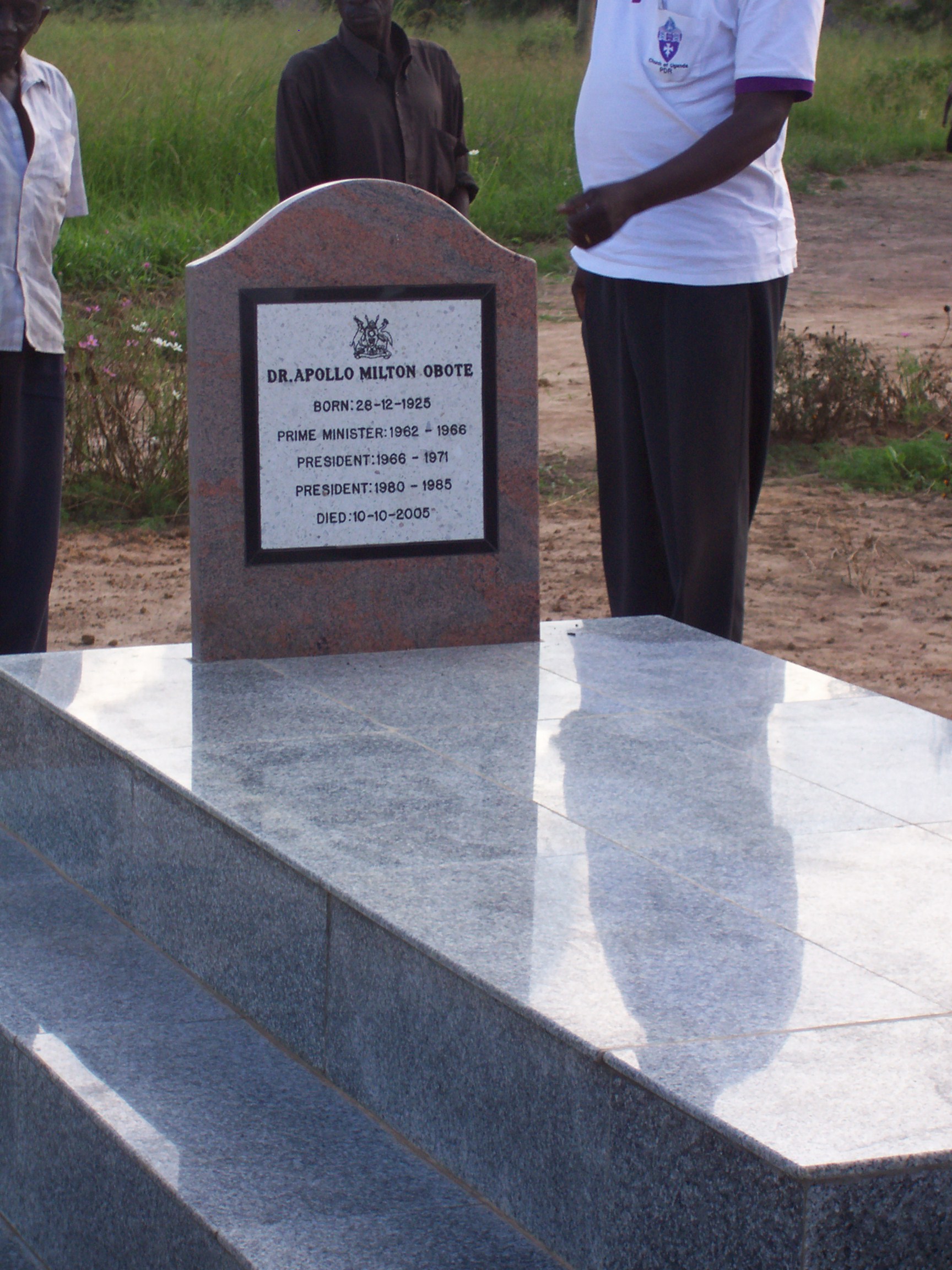 After his second removal from power, Obote fled to Kenya and later to Zambia. For some years, it was rumoured that he would return to Ugandan politics. In August 2005, however, he announced his intention to step down as leader of the UPC. In September 2005, it was reported that Obote would return to Uganda before the end of 2005. On 10 October 2005, Obote died of kidney failure in a hospital in Johannesburg, South Africa.

He was survived by his wife and five children. On 28 November 2005, his wife Miria Obote was elected UPC party president.

How to Replace a Lost NGO Certificate in Kenya