in General News
Reading Time: 4 mins read
A A

The Kenya Film Commission  (KFC) was established by the Kenyan government in 2005. It came into full function in mid-2006. The Kenya Film Commission was formed with the aim of promoting the Kenyan film industry locally as well as internationally. International film-makers looking to film in Kenya are offered detailed information on locations by the commission, as well as liaison services on behalf of the government, advice on reconnaissances, film licensing and immigration, and facilitation of the filming process.

The Kenya Film Commission was under the ministry of Sports, Culture and the Arts since its inception in 2005 until 2019 when it was moved to the ministry of ICT, Innovation and Youth affairs. The board is appointed by the minister. Board members are Chris Foot (board chair), Judy Bisem, Njoki Muhoho, Julius Lamaon, Michael Onyango, Mwaniki Mageria and Felix Mugabe. 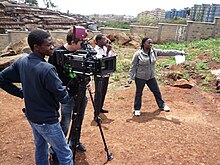