in Tech Terms
Reading Time: 4 mins read
A A

DVB-H (Digital Video Broadcasting – Handheld). A European standard specifically for the broadcasting of television content to hand-held devices based on DVB-T. As of 2007, live trial runs of DVB-H have started in many European countries, as well as other countries around the world.

DVB-H (Digital Video Broadcasting – Handheld) is one of three prevalent mobile TV formats. It is a technical specification for bringing broadcast services to mobile handsets. DVB-H was formally adopted as ETSI standard EN 302 304 in November 2004. The DVB-H specification (EN 302 304) can be downloaded from the official DVB-H website. From March 2008, DVB-H is officially endorsed by the European Union as the “preferred technology for terrestrial mobile broadcasting”. The major competitors of this technology are Qualcomm‘s MediaFLO system, the 3G cellular system based MBMS mobile-TV standard, and the ATSC-M/H format in the U.S. DVB-SH (Satellite to Handhelds) now and DVB-NGH (Next Generation Handheld) in the future are possible enhancements to DVB-H, providing improved spectral efficiency and better modulation flexibility. DVB-H has been a commercial failure, and the service is no longer on-air. Ukraine was the last country with a nationwide broadcast in DVB-H, which began transitioning to DVB-T2 during 2019.

DVB-H technology is a superset of the successful DVB-T (Digital Video Broadcasting – Terrestrial) system for digital terrestrial television, with additional features to meet the specific requirements of handheld, battery-powered receivers. In 2002 four main requirements of the DVB-H system were agreed: broadcast services for portable and mobile usage with ‘acceptable quality’; a typical user environment, and so geographical coverage, as mobile radio; access to service while moving in a vehicle at high speed (as well as imperceptible handover when moving from one cell to another); and as much compatibility with existing digital terrestrial television (DVB-T), to allow sharing of network and transmission equipment.

DVB-H can offer a downstream channel at high data rates which can be used as standalone or as an enhancement of mobile telecommunication networks which many typical handheld terminals are able to access anyway.

Time slicing technology is employed to reduce power consumption for small handheld terminals. IP datagrams are transmitted as data bursts in small time slots. Each burst may contain up to two megabits of data (including parity bits). There are 64 parity bits for each 191 data bits, protected by Reed-Solomon codes. The front end of the receiver switches on only for the time interval when the data burst of a selected service is on air. Within this short period of time a high data rate is received which can be stored in a buffer. This buffer can either store the downloaded applications or playout live streams.

The achievable power saving depends on the relation of the on/off-time. If there are approximately ten or more bursted services in a DVB-H stream, the rate of the power saving for the front end could be up to 90%. DVB-H is a technical system which was carefully tested by the DVB-H Validation Task Force in the course of 2004 (see ETSI Technical Report TR 102 401). DVB-SH improved radio performances and can be seen as an evolution of DVB-H. 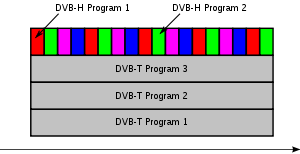 DVB-H is designed to work in the following bands:

DVB-SH now and DVB-NGH in the near future are expected to expand the supported bands.

DVB-H can coexist with DVB-T in the same multiplex.