in Tech Terms
Reading Time: 7 mins read
A A

Chipset – definition – Mobile phones run on so-called embedded chipsets, which are designed to perform one or a few dedicated functions, often with real-time computing constraints. They are embedded as part of the complete device including hardware and mechanical parts.

The ever-popular smartphones are equipped with more advanced embedded chipsets that can do many different tasks depending on their programming.

Thus their CPU (Central Processing Unit) performance is vital for the daily user experience and people tend to use the clock rate of the main CPU that’s in the heart of the chipset to compare the performance of competing end products.

As we already pointed out, the clock rate of a processor is only useful for providing performance comparisons between computer chips in the same processor family and generation.

Also, as mobile gaming is increasingly gaining popularity, users have become more aware of the various types of GPU (Graphics Processing Unit) chips that come as part of the mobile chipsets and sometimes even consider their performance when making buying decisions.

In a computer system, a chipset is a set of electronic components in an integrated circuit known as a “Data Flow Management System” that manages the data flow between the processor, memory and peripherals. It is usually found on the motherboard. Chipsets are usually designed to work with a specific family of microprocessors. Because it controls communications between the processor and external devices, the chipset plays a crucial role in determining system performance.

In computing, the term chipset commonly refers to a set of specialized chips on a computer‘s motherboard or an expansion card. In personal computers, the first chipset for the IBM PC AT of 1984 was the NEAT chipset developed by Chips and Technologies for the Intel 80286 CPU. 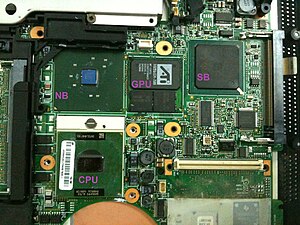 In home computers, game consoles, and arcade-game hardware of the 1980s and 1990s, the term chipset was used for the custom audio and graphics chips. Examples include the Commodore Amiga‘s Original Chip Set or SEGA‘s System 16 chipset.

In the 1990s, a major designer and manufacturer of chipsets was VLSI Technology in Tempe, Arizona. The early Apple Power Macintosh PCs (that used the Motorola 68030 and 68040) had chipsets from VLSI Technology. Some of their innovations included the integration of PCI bridge logic, the GraphiCore 2D graphics accelerator and direct support for synchronous DRAM, the forerunner of DDR SDRAM memory.

In the 1980s, Chips and Technologies pioneered the manufacturing of chipsets for PC-compatible computers. Computer systems produced since then often share commonly used chipsets, even across widely disparate computing specialties. For example, the NCR 53C9x, a low-cost chipset implementing a SCSI interface to storage devices, could be found in Unix machines such as the MIPS Magnum, embedded devices, and personal computers.

Move toward processor integration in PCs

Before 2003, any interaction between a CPU and main memory or an expansion device such as a graphics card(s) — whether AGP, PCI or integrated into the motherboard — was directly controlled by the northbridge IC on behalf of the processor. This made processor performance highly dependent on the system chipset, especially the northbridge’s memory performance and ability to shuttle this information back to the processor. In 2003, however, AMD’s introduction of the Athlon 64-bit series of processors changed this. The Athlon64 marked the introduction of an integrated memory controller being incorporated into the processor itself thus allowing the processor to directly access and handle memory, negating the need for a traditional northbridge to do so. Intel followed suit in 2008 with the release of its Core i series CPUs and the X58 platform.

In newer processors integration has further increased, primarily through the inclusion of the system’s primary PCIe controller and integrated graphics directly on the CPU itself. As fewer functions are left un-handled by the processor, chipset vendors have condensed the remaining northbridge and southbridge functions into a single chip. Intel’s version of this is the “Platform Controller Hub” (PCH) while AMD’s version was called Fusion Controller Hub (FCH, this name stopped being used with the release of the Zen architecture), effectively an enhanced southbridge for the remaining peripherals—as traditional northbridge duties, such as memory controller, expansion bus (PCIe) interface and even on-board video controller, are integrated into the CPU die itself (the chipset often contains secondary PCIe connections though). However, the Platform Controller Hub was also integrated into the processor package as a second die for mobile variants of the Skylake processors. The northbridge to southbridge interconnect interfaces used now are DMI (Intel) and UMI (AMD).